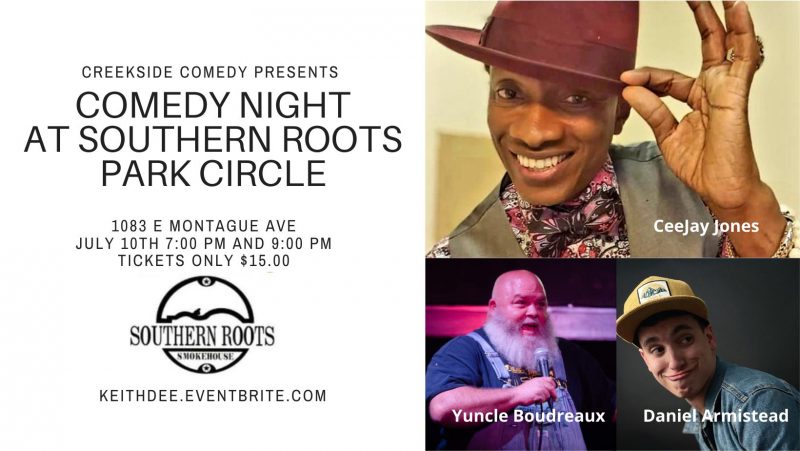 About our comedians:
Headliner Carl “Cee-Jay” Jones is one of the hottest, freshest comics to hit the comedy scene. Cee-Jay has appeared on BET’s Comic View, Showtime At The Apollo and is a current headlining performer for Carnival Cruise Lines and comedy clubs all around the country. Cee-Jay is wild and totally outrageous, with a style of comedy that is all his own. His stage presence, quick wit, high energy, and rapid-fire delivery keeps his audiences laughing non-stop from the moment he hits the stage. In Cee-Jay’s world, nothing is off-limits. He gives you his perspective on how he sees the world, and when he does…..YOUR WORLD WILL NEVER BE THE SAME!

Born and raised in SC, Yuncle Boudreaux is a tailgate philosopher with the gift of gab. Some say he’s full of wit (or something that rhymes with wit).
A Raconteur extraordinaire. He’ll make you laugh your liver loose.

Daniel Armistead is an up-and-coming comedian and Summerville native. Growing up in a Christian household with a stutter gives him a pretty unique and observant perspective. He started doing comedy because he currently works at a bank, and he has to fake being professional for much too long.

Keith Dee is the biggest independent comedy show producer in Charleston, SC. He produces comedy shows all over the Greater Charleston area. His high-quality shows feature celebrity and world touring comedians. You will be glad you came to this show.