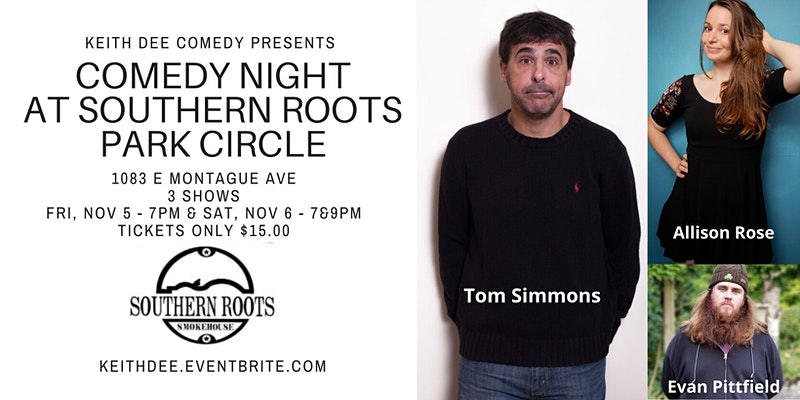 About this event
Keith Big Daddy Dee brings you another incredible night of stand-up comedy with the hilarious lineup up of nationally touring comedians, Tom Simmons, Allison Rose, and Evan Pittfield. Buckle up for this high-energy blast of hilarity. The Wicked Weed Stage at Southern Roots Park Circle, designed for comedy shows, promises a great night of laughs.

Headliner Tom Simmons is a comedian that many find hilarious and some, of course, do not. He is a writer on The Ms Pat Show. Credits include five comedy albums that are heard regularly on Sirius/XM. He has a Dry Bar Comedy Special and has appeared on Comedy Central, Comedy.TV, Comics Unleashed, Showtime, BET. A winner of the San Francisco International Comedy Competition. Comedy Festival appearances at Just For Laughs, Aspen, Laughing Skull and Boston.

Tom Simmons has been unable to write a solid bio for twenty-three years.

But he’s good at comedy. Come see him do that.

Allison Rose is an NYC comedian, writer, and photographer. Born on a quiet farm in Kansas, she came into her own on the loud stages of Denver dive bars. She isn’t afraid to discuss anything on stage, and her thoughtful but unabashed honesty casts a new light on these still pretty weird times. She has been featured on the Red Clay, 208, Savage Henry, and Yuck Fest comedy festivals. She is a regular at Comedy Works in Denver but currently resides in Brooklyn where she hosts the NYC edition of We Still Like You and a comedy roast show called We’re Not Sweet. You can catch her performing in bars, basements, bodega backyards, comedy clubs, and porches all across the country.

Evan Pittfield is energetic yet lazy, analytical yet relatable, absurd yet witty, exaggerated yet precise, surreal yet accessible, laid back yet engaging, passionate yet tired, but most importantly Evan is in love with cats and making people laugh!!! Evan is overweight

Keith Dee is the biggest independent, stand-up comedy show producer in the Lowcountry. He produces comedy shows all over the Greater Charleston area. His high-quality shows feature celebrity and world touring comedians as well as local and regional talent. You will be glad you came to this show.