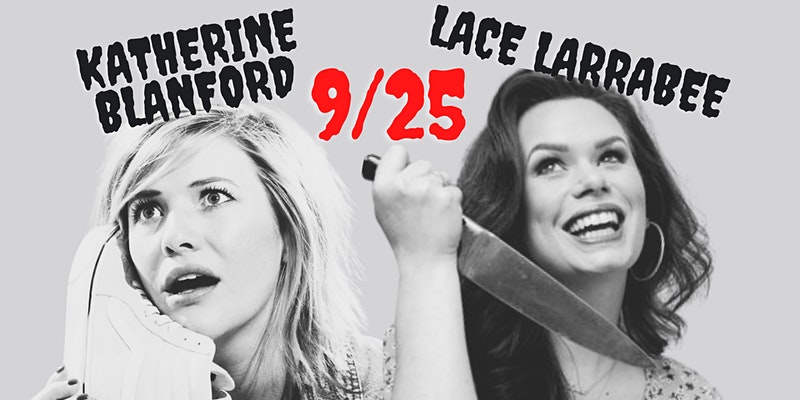 Comedy at The Sparrow with Lace Larrabee and Katherine Blanford

Lace Larrabee is an Atlanta-based actor and nationally touring stand-up comedian who can be seen at clubs from coast to coast. Festival credits include; the Laughing Skull Comedy Festival (2017 semi-finalist), the She-Devil Comedy Festival, the Laugh Your Asheville Off Comedy Festival, and the She Dot Festival in Toronto. Lace was also named “2018 Best Local Comedian” by the readers of Creative Loafing Magazine.

From stage to screen, Lace’s comedy has been featured on Viceland’s Flophouse and she is a FOX network favorite with several appearances on their TV shows; Laughs, Dish Nation, and Punchline, all available on Hulu and/or YouTube.

Lace is also very passionate about helping to elevate the voices of other women. She founded Atlanta’s first and only all-female stand-up comedy class Laugh Lab at the legendary Punchline Comedy Club.

Katherine is an Atlanta-based comedian and human golden retriever: playful, silly, and loves being let out of her crate.

​She tours all over the Southeast and has opened for Jeff Foxworthy, April Macie, Ron White, and Matteo Lane. Katherine has featured at The 10,000 Laughs Fest, Laughing Skull Comedy Festival, and Red Clay Comedy Festival.

Her film work includes credits as a co-writer of the short,

​If that’s not enough Katherine for you, she runs a monthly sold-out show called “Walkie Talkies” at New Realm Brewing on the Beltline. She also makes up half of the touring Bleach & Blonde Comedy Party with comedy favorite, Katie Hughes.

​Wish Katherine had a juicy, new podcast for you to stream?